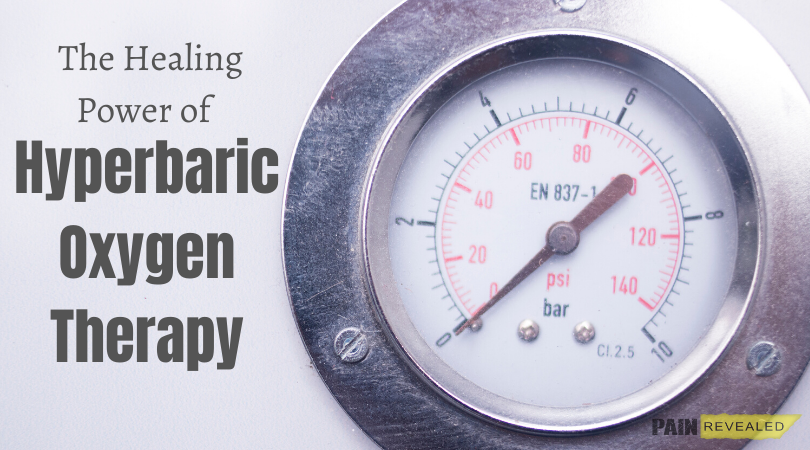 Hyperbaric oxygen therapy (HBOT) has been around for decades but has seen increasing use in recent years. The therapeutic benefits are many, and new uses for it are being found all the time.

Because it is non-toxic, non-invasive, and has no dangerous side effects, it is an option that patients can consider for their own healing needs to combat pain, injury, and disease.

In Pain Revealed, Dr. Jason Sonners discussed his introduction to hyperbarics, and his use of this modality in his practice. After trying hyperbaric treatment at a Chiropractic conference, he was able to experience significant healing of a herniated disc. This was enough to make him a believer, and he immediately incorporated it into his own practice.

The way this treatment works is by the increase of air pressure in the hyperbaric chamber. The body is then able to absorb more molecules of oxygen than under normal air pressure. On Dr. Sonner’s website, we read,

“By increasing the air pressure, oxygen is then driven into the body’s fluids, allowing a super-saturation of tissues and organs with oxygen. The increased pressure infuses the body with oxygen, even reaching injuries with damaged circulation.” When discussing the treatment, Dr. Sonners stated, “By literally fueling and feeding the tissue that’s starving, it has the capacity to create a new healing response.”

In its early days, doctors observed that when patients received HBOT for conditions such as smoke inhalation or air and gas embolism, any wounds they had healed unusually quickly. This led to the treatment being used for the treatment of especially tough diabetic wounds and ulcers as well as burns.

His practice makes use of the treatment with many patients who are undergoing stem cell therapy. He notes that some chiropractic treatments release stem cells, but that he also receives referrals from other doctors who administer stem cell treatments.

He believes that HBOT should be a first-line therapy for many conditions, and not just be approved by insurance companies when someone suffers from serious conditions such as diabetic neuropathy or gangrene.

He asks, “Why are we waiting until someone is that far gone before we implement something that is so fundamental? We all need oxygen… Aging is wounds – micro-injuries that don’t heal exactly the way we need them to.”

If we could address those issues as they occur, we could regenerate tissue. He does believe it is worth investigating whether hyperbaric is something that should be used for general maintenance and well-being on a broader basis.

Dr. Sonners hopes that the utilization of HBOT will increase in the near future, and predicts that this could involve an increase in the numbers of smaller units suitable for use in any healthcare clinic. Small portable units could be made available for patient use at home.

He believes that more doctors and patients need to be made aware of this treatment option and that patients who may benefit should look into its availability in their area.